Relic Splatter is an action-adventure game where you play as Rebecca Ciler, treasure hunter at the Relic Splatter Inc. Your goal is to find all the gold relics in each chamber with the use of your paintball gun. By coloring the walls you can spot secret passages and hidden relics. If you are a true collector there are also 2 secret red relics in each level. :)

- WASD or Arrow keys to move.
- Click and hold the mouse button to shoot and color walls. If you shoot downwards you can use your weapon as a Jetpack.
- Spacebar to change weapon.

All assets were made by me,  Alessandro Pezzetti aka havana24
8bit sound effects made with Bfxr and Freesound.
Background music by Playonloop.com
Pixel font by Kenney.

it wont let me move!

This gave me massive splatoon vibes

Me too. It happens sometimes does it?

I bet it does

sometime in the splatoon universe

Well, I've heard of Splatoon, but I've never played it before. Is Splatoon like a paint shooter game or something?

That's just the very core though. It goes much deeper than just that. (Also I can't wait for Splatoon 3!!)

what do you think of Splatoon 3?

ikr i serched for "splatoon" and then this came up

anyway i think it might work now lemme try

nice gam, loved it. wasnt really hard to beat.didnt even get the monetization! :-P 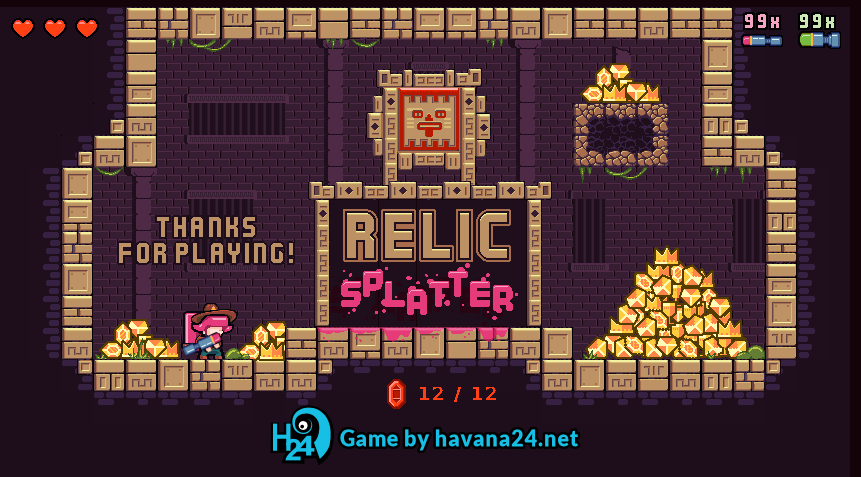 Great game, would be much better if I could play it here instead of the browser version. I find myself accidentally clicking the outside of the game window a lot of times and that lead to some cheap deaths, hopefully there'll be a full version on itch.io in the future!

It's a really good game, but can you make a download version? Some computers, such as mine, have a hard time running browser based games,  thanks 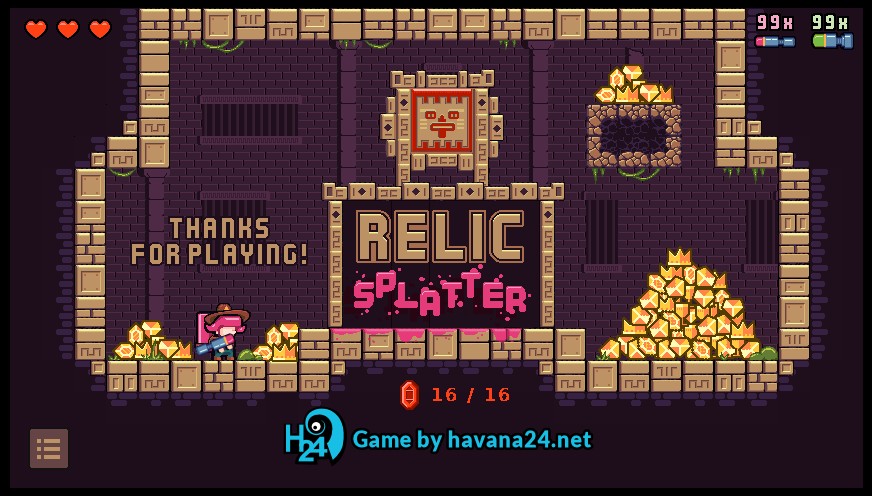 i don't remember, sorry,
but You easy find full solution on YT :)
greets

yep, at least currently only 12 red gems around

can you beat relic splatter without using the spitter to fly

completion rules: same rules as any%

post you strats to get past the levels in the coments and if you finish post a vid!

I took this a step further and decided to never ever use the spitter unless it was 100% necessary to progress, I shot 2 pink bullets in total, both in level 2. I'll make video soon  but the main crutch is the fact it takes 2 bazooka shots to get to the top gold relic, and you need a third one to break it. I tried looking for a way to get up in one bazooka shot but failed, so the next course of action was to find an angle that I could shoot from that was within one bazooka shot. But if it was too far away it failed because the shot would despawn after going off the edge of the screen. I shot at it from directly below and only broke one block, I even did some testing with the spitter to see if I could any angle but only found I could break the top most block, so that's level 2. Then level 3 came and I thought it was also impossible but then found a glitch that barely would get you up, ledge jumps. You start off by painting the ledge you want to ledge jump up. Then you bazooka up to the to and spam jump, if you did it correctly then you would barely get up with no bazooka shots to spare. And luckily there is a green pool nearby, so I tried extending this trick to level 2 and couldn't find any uses, so yeah. No other level presented trouble and I even found a version that's 2 levels longer and beat it with no troubles. So right now the minimum shots is 2, I'll post a video soon maybe. 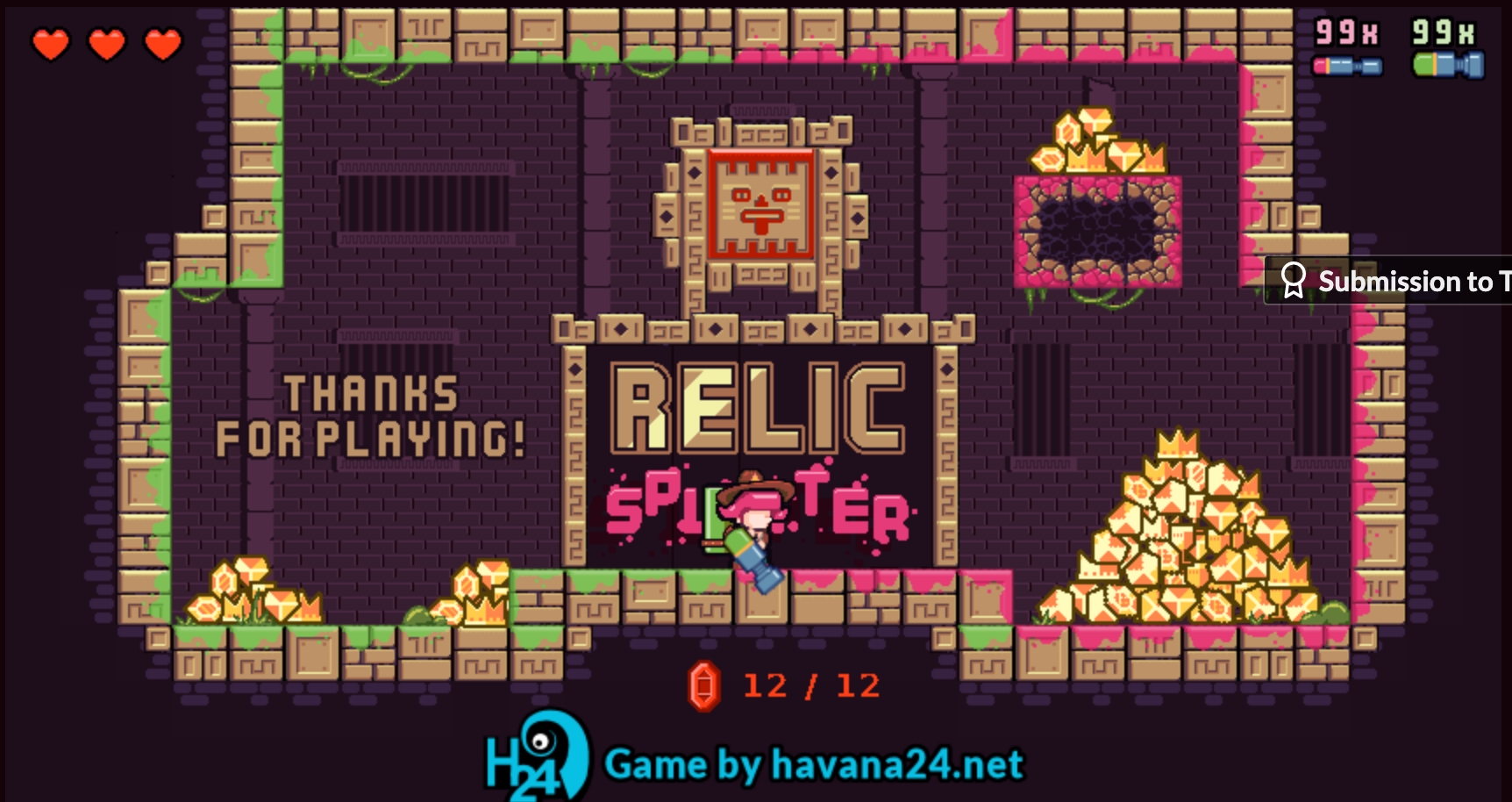 It would be nice if it had a level select so I could go back for 100% completion.

Hi! I added 2 more levels and a level selection to this game, you can play the updated version on my site over here: https://www.havana24.net/index.php?pag=games⊂=relic_splatter

very nice! I find it a bit too easy to press R to restart. But otherwise, I love this game and I hope you will make more level in the future!

Very fun and well made, the music is really good.

its an excellent game but needs an option to put it in fullscreen to get rid of the links that appear in the top right - twice now ive accidentally clicked on one of them and been taken to a different page !

on returning to the game ive had to start from the beginning again which is really annoying ... or maybe add a level select ? 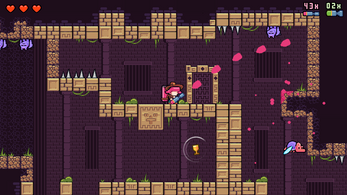 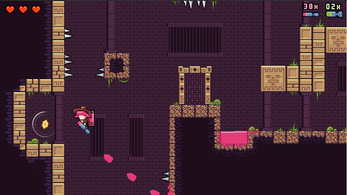 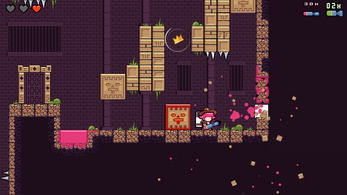 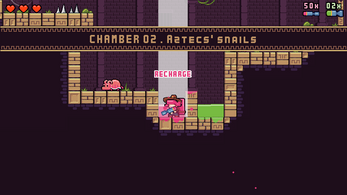